“And young men’s blood goes on being red, while the Army just goes on ahead recruiting” 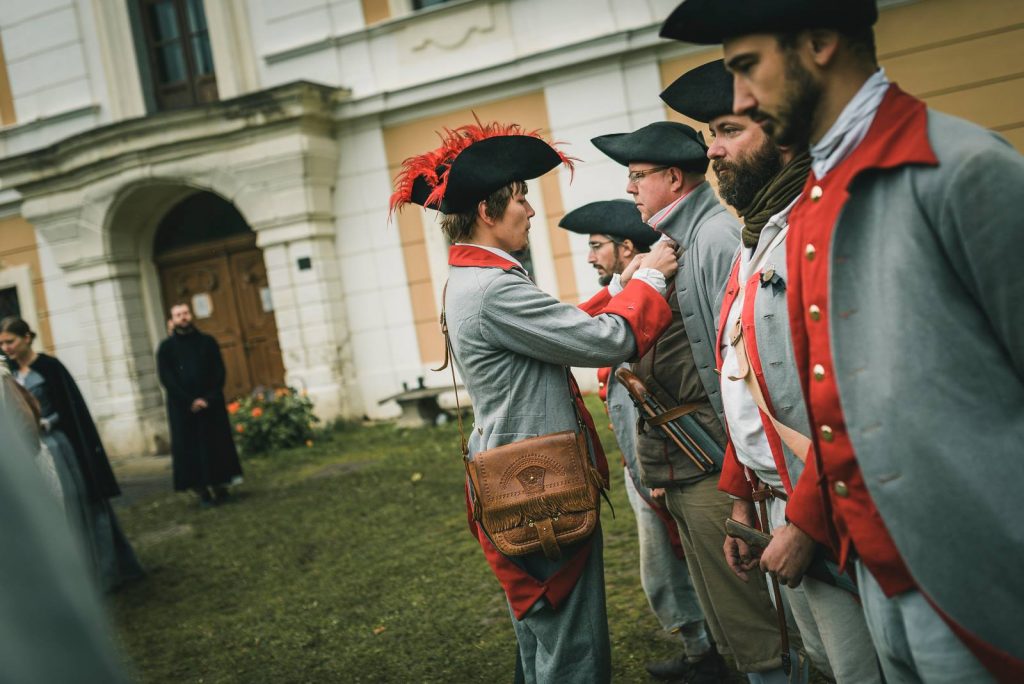 The signup for 2019 is now open.
If you’d like to sign up as a volunteer or NPC,  look at the tab Being a volunteer below. If you want to apply for a discount, the application process is open until the 8th of February 2019 – apply here.

The questionnaire is fairly detailed, but do not worry – there is a 2 week-interval for signing up and everyone who signs up in this interval will have an equal chance of getting a spot at the game. The first interval ends on the 15th of February 2018. If we have more people interested than spots available, we will draw lots from the entire interval. If we do not have enough people to fill the run, we will open another interval.

For the game to run, we also need at least 20 volunteers or NPCs. More about this option below.

Casting
Gender
Being a volunteer
Casting

The casting will be done by us according to the preferences and comments you give in the questionnaire – since the game works with low transparency, self-casting is not really possible, as players do not have all the information they need.
Once we receive your questionnaires, we will process them and, in time, send you a choice of three characters with descriptions which we think should fit your needs. We will then ask you to order them according to preference and comment your choices, and based on that, we will try to come up with an optimal choice for everyone.
While this process takes time and energy, we believe choosing the right character is very important in our game and so we want to dedicate a good amount of attention to it. However, it also places some responsibility on our players to communicate about their preferences during the casting process.
The way we divide roles is not merit based – you do not need to prove to us that you are an amazing leader or a super smart scholar to play one. You just need to be up for playing the given role.
Since we will be casting by preference only, we will not be taking age or any other off-game attributes into account unless our players actively ask for it. And while of course you can ask us not to cast you as someone much younger, what we aim for is a game where many players will be playing characters that might be different from them in one aspect or another, and so nobody needs to feel bad about it – so we totally encourage you to try something new if you feel like it!

All characters in the game have a set gender and they are either male or female. This is part of the game design and we cannot change the characters according to individual players’ needs. We are aware that some people do not identify within the gender binary and that such people have also existed in history – however, this game does not have such characters (although there definitely are some gender non-conforming ones). At the same time, we definitely welcome non-binary, gender-queer etc. players at our game and we will try our best to provide them with a character that suits them well.

In the sign-up questionnaire, we will ask you what gender you are, but that is primarily for the needs of our costume team. However, you can play either character gender, regardless of what your real-life gender is.

Since the game does aim for some level of visual authenticity, we will ask female-looking players playing male roles and vice versa to use some visual signals and to accommodate their appearance a bit to look more like the gender they are playing.

De la Bête is a huge game – and it needs a lot of people to run. If you want to see the game from another perspective, please, sign up using this questionnaire. The possibilities range from playing non-player characters to managing our technical equipment and special effects.
Being one of our volunteers is completely free, but it does mean working and having a more chaotic experience than the players. We will give you food for the whole event, warm lodging (probably on the floor), a small contribution for your travel expenses (15 euro), and some credit for drinks for the after party. All costumes, props and such will also be provided, as well as game-related materials in English.

The game is prepared mostly by volunteers, but we pay the cooks, the drivers, the photographers, and we try to compensate the clean-up crew. If you want to be part of that, you will get a chance to mention it in the questionnaire.

The game is prepared mostly by volunteers, but we pay the cooks, the drivers, the photographers, and we try to compensate the clean-up crew. If you want to be part of that, you will get a chance to mention it in the questionnaire.